247. Day 5: Another suitcase in another hall

Have spent the day in Haarlem, arriving this evening in Amsterdam.  Just too darned tired with all that globetrotting (thanks DH) to blog tonight.  So here’s a few photos from Haarlem:

END_OF_DOCUMENT_TOKEN_TO_BE_REPLACED 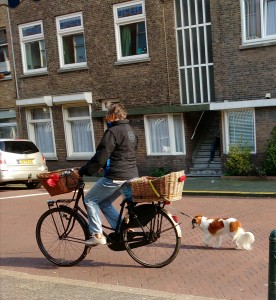 I do realise that this is akin to saying that Italians like pasta or that German trains run on time but I can no longer resist stating the bleeding obvious. Blooming heck- the bikes!

END_OF_DOCUMENT_TOKEN_TO_BE_REPLACED

Should you be looking for careers advice, Benedict is your man.  Not only is he weaving our boat under the low bridges, around the dumped bicycles and past other boats but he is also telling us about Ghent and its history.  In the course of which he has mentioned a few occupations readily available to anyone with a time machine.

END_OF_DOCUMENT_TOKEN_TO_BE_REPLACED

Well, actually eating,  not making, courtesy of the lovely Pieter and Ziggy – the first hosts of this year’s Grand Tour.  On which basis this is, so far, our favourite watering hole.

END_OF_DOCUMENT_TOKEN_TO_BE_REPLACED

“Supposing a tree fell down, Pooh, when we were underneath it?”
“Supposing it didn’t,” said Pooh after careful thought.
Piglet was comforted by this.

I was pretty confident about our Grand Tour in every aspect; apart from the travel, that is, and the accommodation.   Oh, and the food.

END_OF_DOCUMENT_TOKEN_TO_BE_REPLACED 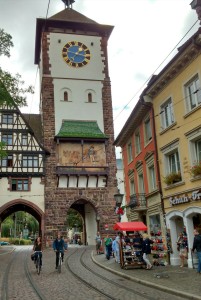 I couldn’t decide what to get you.
Sachertorte or Wiener Schnitzel were
Unlikely to survive the journey.

Lederhosen was a possibility
But I don’t know your size
I couldn’t decide what to get you.

Salzburg had a nice line in pastries
Or possibly some chocolate Mozart balls:
Unlikely to survive the journey.

In the end, I emptied out my suitcase
And decided on a present for myself as
I couldn’t decide what to get you.

Into my case I’ve put the entire
German transport system, the French being
Unlikely to survive the journey.

Trams long and light, fast and frequent, cheap and convenient,
And bicycles everywhere with baskets and baby-seats, bells and child carriers
I couldn’t decide what to get you, but this
Is guaranteed to survive the journey.

He was a bully, our History teacher; a sarcastic, nasty piece of work. If you were lucky, he’d throw chalk at you but he was just as likely to throw the blackboard rubber. “Do you need an extra chair?” he’d sneer at Michael, who was on the stout side. “Will you be in class tomorrow or are you taking the day off to celebrate Jewish Christmas?” he’d say to Rachel. And I probably didn’t see the worst of him; I suspect that was saved for when he took boys’ games.

END_OF_DOCUMENT_TOKEN_TO_BE_REPLACED

Wending our way Westward ho today, don’t you know: training it across Germany before slipping into France to reach Strasbourg about time for a spot of tea and muffins, if the local eatery runs to such riches.

END_OF_DOCUMENT_TOKEN_TO_BE_REPLACED

I was honestly unsure what to expect from Germany.  Having grown up in the Sixties, my image of Germans came from war films, prisoner of war stories and comedy stereotypes.  As an adult, intellectually I learnt the difference between contemporary Germany and the Nazi party but until I saw it for myself, I’d not taken on board the incredible journey the German people have made.
This trip – and Nuremberg in particular – have been a real education.

The cottage on the left is where we are staying as guests of the lovely Fabien: a young man who works as a property developer.  The building and the yellow house you can see to the right are more than five hundred years old.  Inside, he’s done a smashing job on restoring a mad jumble of beams and levels.

All the other houses in the street are post-war.

On the night of 2nd of January 1945, over ninety per cent of Nuremberg was destroyed in bombing.  All of the churches, the town-hall, more than two thousand preserved medieval houses as well as the residential area surrounding the centre were hit.

The restaurant where we ate last night had photos of how it looked before and then immediately after the bombing.  Practically nowhere was intact.

This afternoon we went on a guided tour around the city and were able to see what a superb job the people of Nuremberg have done in its restoration.  They really have recreated a beautiful place from the rubble and are justly proud of their home.

Yet again we were extremely lucky with our guide.  Anya was knowledgeable and enthusiastic.  She took us right through the history of the city from when it was part of Charlemagne’s  Holy Roman Empire to becoming a Protestant Centre after Martin Luther.  Luther himself visited the city twice and stayed in this car-park; only in those days it was a monastery.

We learnt about the little bays which became a fashionable adornment to houses.  Apparently, the city leaders wanted these forbidden on the grounds that a plain facade was more in keeping with the Protestant ideal.  The householders responded by saying that these spaces were simply to give them more room to focus on prayer.  Oh, that’s OK then,     said the council.  Go ahead.

These became known as Ladies Windows as ladies liked to sit there and watch what was going on outside.  In between praying, of course. 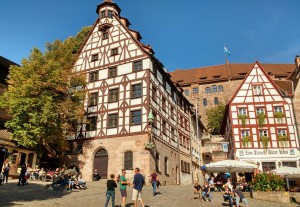 Albrecht Dürer spent much of his life in Nuremburg, so there’s a statue of him, and a museum about him, and a house (above) which belonged to him and an airport named after him, and this statue which is quite recent but was inspired by one of his wood-prints.

Anya talked about the impact that the Nazi period had on the town.  There is an archive and visitors’ centre documenting the history of that time; as in Heidleberg, we were aware that there is a determination to acknowledge what happened and learn from it. 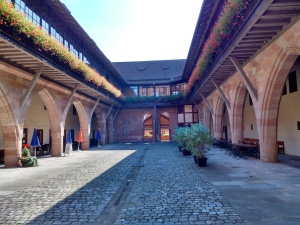 The stones from the Nazi parade ground have been reclaimed to restore the floor of this old peoples’ home.

There were many places left in ruins after 1945, of course.  But I’d never really appreciated how the German people after the War and then – for some – the Soviet occupation, had not just to reconstruct their buildings but also to completely rebuild their society from the ground up.  What a task!

We’ve loved our time here: the places we have visited all seem clean and cared-for; all the Germans we have met have been helpful and friendly.  Their transport system works like a dream: the mix of modern trams and bikes must be a major reason why the cities are so clean and pleasant.  It’s been a brilliant country to visit and I’ve learnt so much.  Tomorrow, we head for France but we’re both keen to come back to Germany next time we go travelling.

Now, we’re going to back into the city for an evening stroll before packing up for the morning.