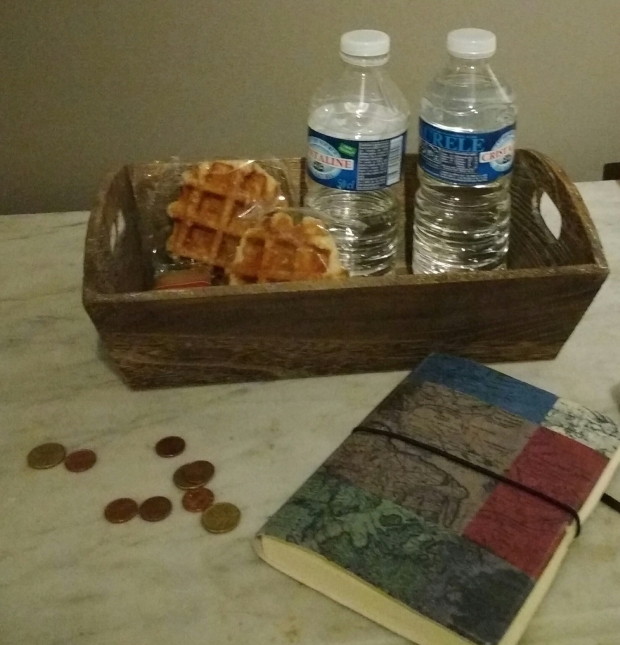 Well, actually eating,  not making, courtesy of the lovely Pieter and Ziggy – the first hosts of this year’s Grand Tour.  On which basis this is, so far, our favourite watering hole.

In my defence, I was jolly tired by the time we got to Ghent – restless night, early start.  Definitely not firing on all cylinders.  Hence, as we trekked from the station to our digs, I couldn’t figure out why this city seemed to be so lavishly furnished with facilities for the fellas.  Not are there urinals which make up for in frequency what they lack in privacy: 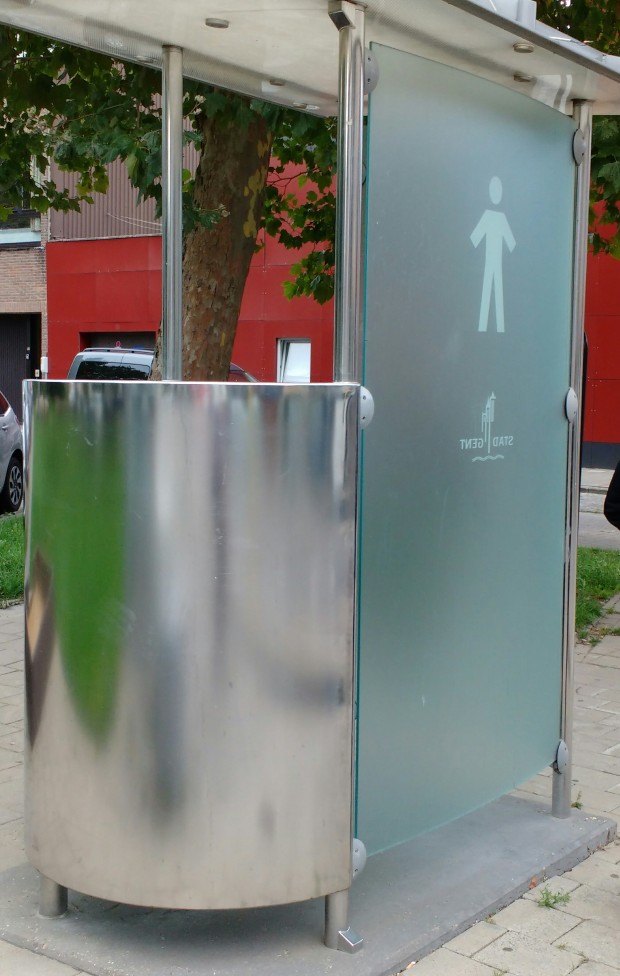 But also, it seemed that every other shop provided a Gents but narry a Ladies in sight. The penny dropped when we started looking through the tourist leaflets which had been left for us by Pieter and Ziggy. 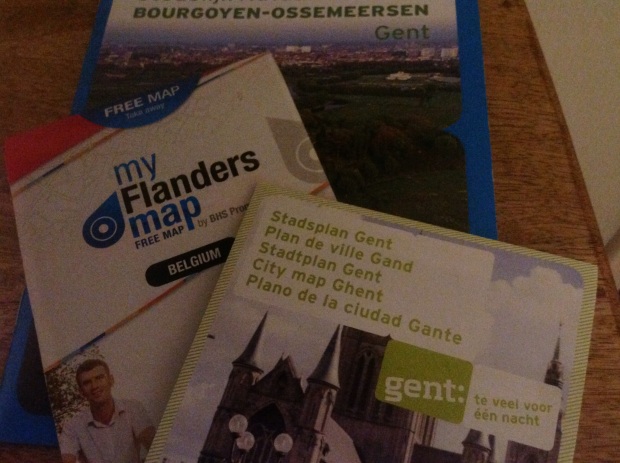 Moving swiftly on.  Last year, we quickly learnt not to judge a place by its station.  I guess a tourist emerging from Waterloo, say, or Kings Cross might be a little taken aback.  Our first impression is that Gent caters for the godly and the heathen. 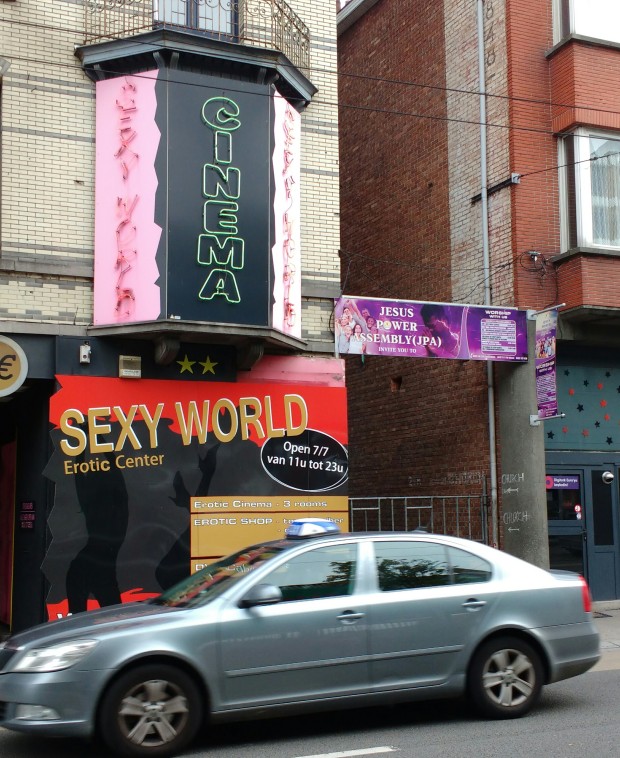 However, when you get to the historic centre of the city, the Godly win hands down.  The place is positively jammed full of cathedrals; one round every corner.  We just popped into the one today – St Bavo – which has a stunning altarpiece “The Adoration of the Lamb.”  You’re not allowed to photograph it, so this is taken from Wikipedia: 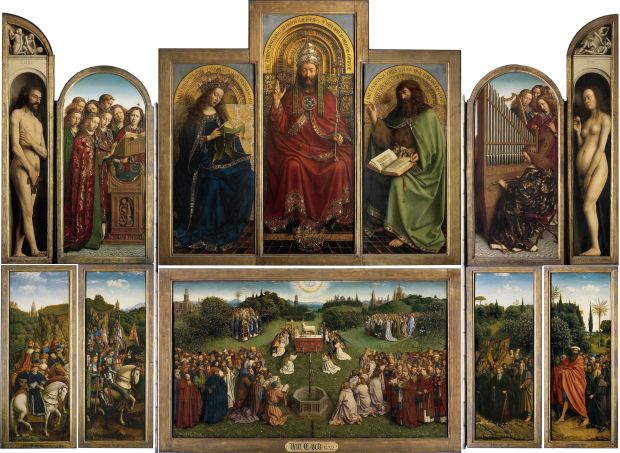 It is a stunning piece of work, which marks – according to our audio guide – the transition “from medieval stiffness to Renaissance humanism.”  It was largely the work of the three Van Eyck  siblings: started by Hubert and his sister, finished on Hubert’s death by the more famous Jan van Eyck.  The painting is signed by Hubert and by Jan but not, you’ll be amazed to hear, by the sister.  As I said, this city is for Gents.

The altarpiece has had its adventures over the years.  Various panels have been stolen and returned, claimed as booty is some wars and hidden away in others. Intriguingly, two of the panels were stolen in the ’30s.   To prove that he had the pieces, the thief returned one of the panels and demanded a massive ransom for the other.  However, the thief was tracked down – at least, a chap was found who had extracts from the ransom notes and the typewriter on which they were written.  He was part way through telling the authorities where the missing panel had been hidden when he had a heart attack and died. So that panel piece is still missing; what is on display is a copy.

I’m turning in now, so I’ll leave you with a few pictures to whet your appetite. Night. 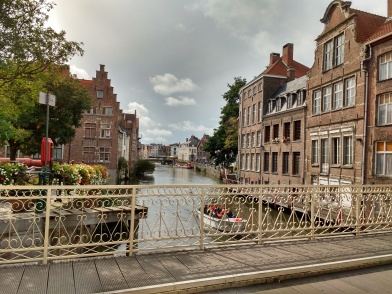 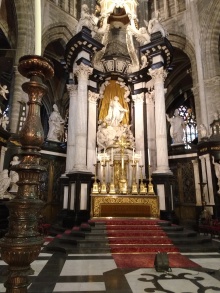 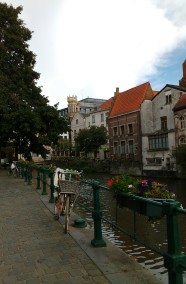 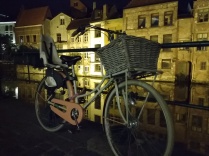 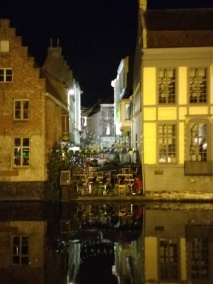 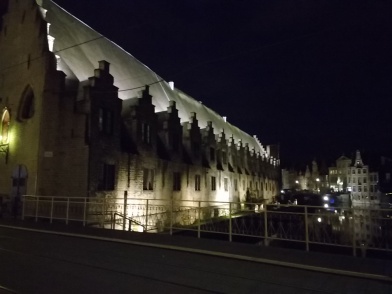 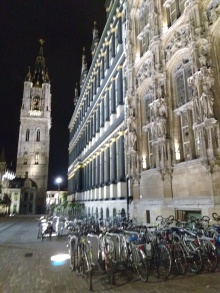