“Supposing a tree fell down, Pooh, when we were underneath it?”
“Supposing it didn’t,” said Pooh after careful thought.
Piglet was comforted by this.

I was pretty confident about our Grand Tour in every aspect; apart from the travel, that is, and the accommodation.   Oh, and the food.

Firstly, I was convinced that the rail travel would somehow get complicated.  The guides say that in some countries – France, for example – you can use your Interrail pass but you also must reserve seats in advance, and sometimes there might be supplements.  I had visions of standing at a ticket office window, like – say – the one at Seven Sisters,  trying to explain what we wanted and being met by incomprehension and Gallic shrugs.  Or, even worse, falling foul in some way of the on-board ticket inspectors, turfed out at VerZeHekkAreWeBerg to sit on our oversized luggage . 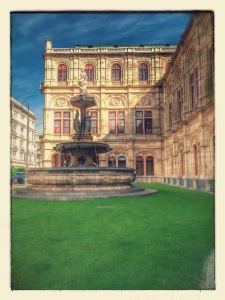 What I had not anticipated was that the people at the help desks would go to enormous efforts, in order to actually be of help. Yes, you could go by that train; but this one would be cheaper because it doesn’t need a supplement.  Yes, this is the tram that you want and I insist on printing that information out for you and highlighting the important bits.  No trouble at all – I’ll just go and get some printer paper.  If don’t mind waiting , I really really want to do this for you.

I have tried to imagine someone at our local station going to such efforts to find us the cheapest and easiest way to travel but, being a bear of limited imagination, I have failed.

And it wasn’t only the professionals who were helpful.  Time and again people stopped on their commutes to guide us through the purchasing of tram tickets, working out the cheapest options, figuring out the best routes.  Not to mention the army of pregnant, one-armed octogenarians wanting to help carry my suitcase.

In fact, the travelling went incredibly smoothly: the plans we made from our living room using the RailPlanner app. just clicked into place.  I was even complimented on the tidy filling-in on the Interrail pass record by one ticket inspector and am hoping for a good end-of-term report.

So, the accommodation.  We’re late converters to AirBnB and I really didn’t know what to expect. It might be really awkward living in someone else’s house, especially when we hadn’t been properly introduced.  Were we going to have to make polite conversation for hours?  Might it be difficult coming and going when we wanted?  Were we going to have to be entertained or, even worse,  entertaining?

In fact, with the exception of the place owned by the KGB, the whole AirBnB thing was a joy.  We were welcomed, we were given keys then we were left alone while our hosts went to work, to stay with parents or to the Oktoberfest. It was astounding, really, the extent to which strangers trusted us with their homes.  In Strasbourg, for instance, we were in the apartment of an art student who had left not just all her books, CDs, DVDs and Computer games but also an Apple Computer, TV, Playstation and other electricals, all of which will shortly be listed on Ebay.

The worry about the food was of my own making.  I’m a veggie.  Last time I was in Paris – just a couple of years ago – it was a bit of a bother finding stuff I could eat.  ‘Veggie’ to the French seemed to translate as “only a small amount of meat and fish”.  Anecdotally, I’d heard that Germany was even worse: bratwurst with everything.  I had visions of dragging a weary but patient ActorLaddie from eaterie to cafe in search of veggie food.

What nonsense!  Eating veggie was as easy on our Grand Tour as it is at home.  Practically everywhere had veggie options.  So that’s something else crossed off the worry list.

So, as it turned out, our Grand Tour was… grand.  Just two days in we started planning the next one.  Scandinavia, maybe?  Berlin?  Budapest?