I’m safely on home territory now; more in danger of rust than sunburn. You know where you are with rain. Siestas confuse me.

We’ve left our achingly replete water-butts and headed down to Cornwall. Near the Minack Theatre, to be precise, where – next week – ActorLaddie will be sharing his vision of Archbishop William Wareham in Wolf Hall.

Over this weekend, the company are doing the get-in, then re-rehearsing the show in its new home. The move from a small London Theatre to this extraordinary space, carved out of the Cornish cliffs, means changes to the layout of the piece as well as some trimming of the text. 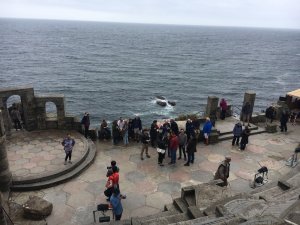 The folk at the Minack have warned us that, with stone seats not being the last word in comfort, an overlong first half leads to some people bunking off at half time.

I have some sympathy with half-time bunkers-off, being something of a regular to this pastime myself. Oh, the joy of giving yourself permission not to listen to another bar of a drunken prog-rock keyboard solo! Or to watch any more Good Guys mowing down American Bad Guys and vice versa!

In this case, though, I think the audience will stick it out because it’s actually a really good production. Providing, of course, the Elements are on side: not so hot that the audience fries – not to mention the actors in their weighty Tudor garb; not so wet that the audience is drenched and King Henry has to put a pac-a-mac over his doublet and hose.

So I’m keeping my fingers crossed that this coming week is largely dry. Though no doubt somewhere, some thoughtless person has just cleaned out her water-butt and is selfishly wishing for rain. Won’t anyone think of the actors!?