“You must do the Night Watchman’s walk,” said CallMeGeorge, our student waiter.  “It starts just there at 8 o’clock and it’s free.”  And so we did. 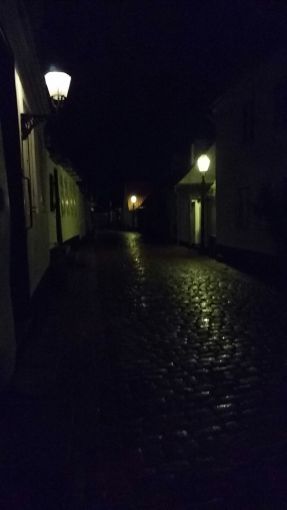 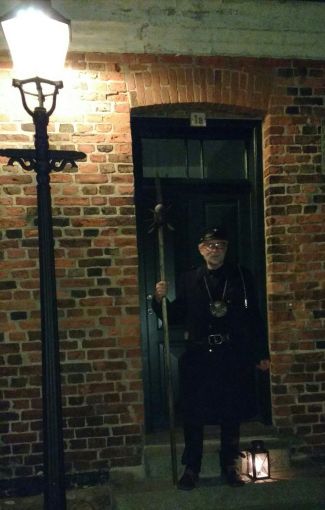 Apparently every night in the summer, a chap in ceremonial garb and carrying a lantern and a big stick with spikes on the end walks around Ribe checking that all is well and singing his merry Night Watchman song.  Bearing in mind that he’s been doing this since the C14th, he’s looking pretty spry.  Apologies for the qualities of these pictures but not only was it dark but there was quite a crowd of us; plus the chap kept moving. 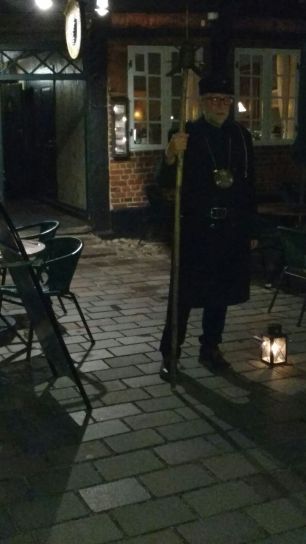 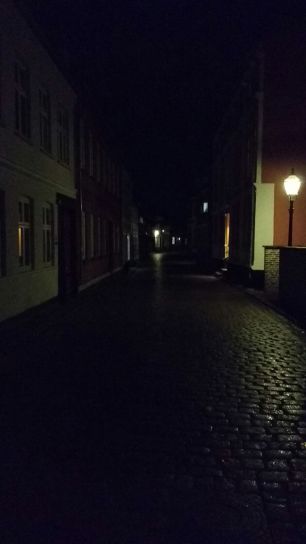 The original Night Watchmen patrolled for ruffians and they were also charged with looking out for fire and floods.  Ribe was prone to floods: there’s a line about one metre up on one of the cathedral pillars showing where the level of the waters reached in a particularly bad flood.  This policing role came to an end in 1902 but in 1932 the job started again as a tourist attraction.  So now, as well as looking for fire, flood and ruffians, the Night Watchman guides assorted tourists through the history of Ribe in both Danish and English. In between stops, he still sings a merry Night Watchman song but, alas, just in Danish.

And what a gruesome history it is!  There were tales of miscreants being condemned to Crushing by Cartwheels: from the legs up for really dastardly deeds but if they repented, they were crushed from the head down, which was quicker. Other unfortunates were hanged on gallows if they were men; a guilty woman couldn’t be put on the gallows because people might look up her skirt, so she was buried alive with a bucket on her head! Witches, of course, were burned, as is only right and proper but repentant witches were given a bag of explosives to speed up the process.  Which was nice.

Wider politics also affected the town.  Denmark was unified under Gorm the Old (how did his parents hit on that name?) who was succeeded by Harald Bluetooth – not much of  a king but really well connected.  But, as with everywhere in Europe it seems, there were alliances with this lot and battles with that lot and you end up wanting to scream: “Just play nicely, can’t you! And take that bucket off your sister’s head!!”

So that’s Ribe.  Next, Odense – home of Hans Christian Anderson: just one night on our way to Copenhagen. According to his blurb,  our host is a professional badminton player.  Feel free to insert your own racket joke here.