240. They go up diddley-up up; they go down diddley down down…

Pick us, Miss, pick us! Look how neatly we have lidded our marker pens! And see our flip-chart of ideas – a thing of beauty, too, in many colours, to which we all contributed collaboratively, working as a team…

Apart, that is, for the cow who teaches at – well, you know the one. Her anyway. Didn’t want to come on the course in the first place.  Thought ‘Schemas in the Under Sevens’ was going to be about curriculum plans and not fannying around with a load of bricks. The only thing that’s stopping her playing with a mobile phone is that they’ve not yet been invented.  We’d be better off teaching six year olds to name parts of speech, according to her.  What a dinosaur!

The rest of us, though, we’ve got some really good ideas about using classroom observations to work out a child’s preferred Schema. So pick us!  OK, or them, I guess. We’re all adults; it doesn’t really matter who goes first. Though – for the record – we did have that idea too.

They were very big in Early Years Education at one time, were Schemas: patterns of behaviour that young children frequently explore as they learn about the world.  The principle was that if, for example, you spotted a child who had a particularly strong Circle Schema, you’d plan in opportunities to, say, roll out pastry.  Or to look closely at how gears work. Or to roll hoops, spin tops, paint enormous circles with water. Thus, moving their learning on by capitalising on their interest and stage of development.

I said “were very big” – actually Schemas still feature in our understanding of child development: in fact, I’ve just discovered that they underpin a whole CBeebies series.  But they no longer feature much in schools, who are too busy jumping through hoops to go round in circles.

Last week, I spent a couple of days looking after Great-Niece Nantes while her mum made costumes for the English National Opera. Nantes is still a Vertical Schema kinda gal: ups and downs.  Give her blocks and she’ll stack them to make a tower as high as an elephant’s eye; all beautifully balanced. If there’s something to climb, she’s at the top at the blink of said eye.  Her favourite toy last week was a new ball – you throw it up, it comes down. Who knew?  It’s great to have the luxury of seeing her explore this without worrying about what the other twenty-nine children are doing.

It struck me that we’ve really missed a trick with young Nantes.  Had she been born a hundred and fifty years ago, she’d be perfect as a chimney-sweep’s assistant. Up and down those chimney stacks like lightening and no need for brushes: just the occasional shampoo would see her fine.

Mind, the vertical thing does seem to be widely on-trend at the moment.  Having spotted a number of bright young things swanning around town in wedge shoes, ActorLaddie and I were well impressed last week to find that not only is our plasterer darn good at plastering but is also, clearly, something of a fashion icon. 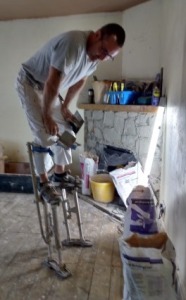 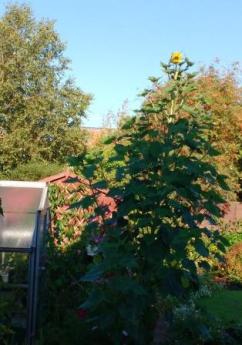 In other news, our mystery ‘small’ mixed annual revealed herself this morning to be … a sunflower.  Well done, Angela, for being the first to suggest this.  A Blankety Blank cheque book and pen are heading your way.

There appear to be a number of small sunflower heads, which might make a lovely display if only I knew someone good at climbing who could fetch them for me… 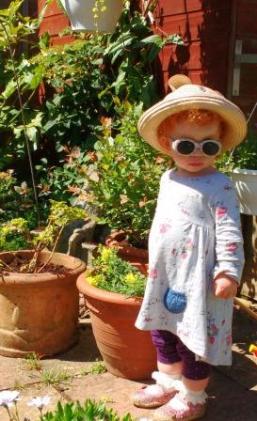 Nantes at the ready