238. One of these things is not like the others…

I’d popped into Lidl’s really for some packets of herb seeds.  I’ll not say this too loudly, at risk of causing a stampede – we’re not too far from the site of the Great Ikea Riot of 2005 – but you can get a packet of parsley seeds for just 49p in Lidl’s.  I know, amazing isn’t it! And then I spotted a packet of Mixed Annuals.

Now, I’m not really a Mixed Annuals kind of girl.  They feel a bit risky to me: I like to know what I’m planting and where.  Usually, I choose plants in the lavender / cream / dusty pink / blue kind of spectrum – thems being the colours what I like. Here, look – photo taken before a recent tea-party:

“It almost appears planned,” ActorLaddie said once.  I nearly felled him with my graph paper.

Next to the green-house is a small border which looked great in the spring – daffs, bluebells, wallflowers and the rest – but, as we headed towards the summer, started to turn tatty.  So on a whim, I decided to live adventurously and splashed out £1.49 on the aforesaid packet of Mixed Annuals.

The packet proved to contain three seed tapes, labelled tall, medium and small. So I planted the tall at the back of the border, the medium in the middle and…. well, you’ve got it.  Then I sort of ignored them because it’s been a busy summer.

So we’ve had all the Turning Sixty shenanigans – tea-parties and the like – and the ongoing living room decorating and then, last week, we went to a young cousin’s wedding in the South of France.  She doesn’t come from France – she’s Scottish, in fact – so two o’clock in the morning found le Château de Pennautier ringing to Loch Lomond belted out by a positive tweed of Enthusiastic Men is Kilts. All of which means that the garden has rather been on the back burner.

Still, the mixed annuals have chugged away on nicely their own, and I think the border’s looking pretty good, particularly for £1.49.   There is a certain something, though, that isn’t quite right and I can’t put my finger on it. Hey, perhaps our combined powers might pin it down.

Here’s the border from the side:

And a couple of photos from the front: 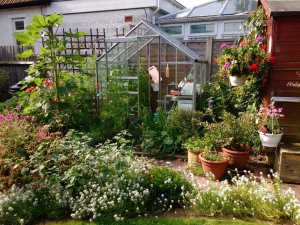 I can’t quite work out what’s out of place.  Any ideas? Na, me neither.