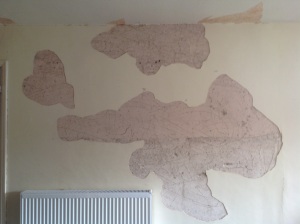 “I think it looks like a rabbit; sort of leaping sideways.  Like in the film of Watership Down … you know, the Bright Eyes bit.”

ActorLaddie puts on his peering glasses.  “I was thinking a gun, myself.”

“Well that,” I say self-righteously, “is the difference between us.”

Which isn’t really fair, as ActorLaddie doesn’t have a violent bone in his body whereas I am, in fact, feeling murderous. The trouble with decorating the lounge is that it takes so blooming long and I’d rather be hey-nonny-no-ing in the garden or even – sheepish gulp – updating this blog.

It’s our one reception room, is the lounge, so to even get to the walls you have to shove round the bookcases, chairs, tables and the rest to make a space. Like that tile puzzle game thing where you –well, shove everything around to make a space.

And at some stage – presumably when the room was extended in the seventies – it was re-plastered with a layer so thin that just breathing on it seems to make it fling itself off the wall in pique.  So in the evening, we sit surrounded by our very own Rorschach tests. 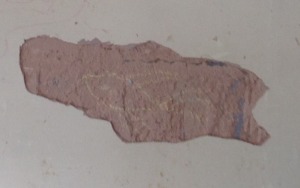 Either he’s gone mad or I have.