We’ve come to an agreement, this apartment and I.  I’m going to be grateful to it for providing a comfortable bed, reasonably priced, reasonably near the centre of Vienna. In its turn, the apartment will try hard to not resemble the set of a black and white cold war thriller starting Alan Bates and Richard Burton.

Had I but world enough and time, I’d now amuse you with a witty pastiche centred around the WiFi code which was thrust into my hand by the YoungChap who let us into the apartment, shortly before asking us not to discuss our visit with the neighbours. But alas, I need to talk socks.

It’s half way though our travels and we’ve darn nearly run out of socks as well as a few other unmentionables.   As it turns out, there’s no washing machine in this apartment, so yesterday I asked YoungChap if there were machines we could use elsewhere in the building.  He looked a bit panicky, I thought, and said that would be difficult.

My theory is that YoungChap was anxious about possible conversations with neighbours developing around the dryers.  ActorLaddie thinks it’s more likely that any young chap would look panicky when asked questions about washing machines.  I’ll leave you to judge.  Anyway, we went off in search of a washing machine.

Things looked promising to start with: a metal door at the bottom of the stairs is labelled thus:

We’ve got no German, A.L. and I but even we figured out that there was a more than even chance this meant ‘Washing Cooker.’  The  key for the apartment fitted the lock and yes! A bank of washing machines all ready to cook our socks.  One was very similar to our Bosch at home so we felt fairly confident that we could get it to work.  Unfortunately, it turned out that in able to get power to the machine, you needed a special swipe card and the KGB had failed to provide this with out Junior Spy kit.

Next we tried the launderette down the road.  Plenty of enormous state of the art washing-cookers but infathomable instructions and no one to ask for help.

In the end, we cooked our socks in a bathtub of Radox and have tried to wring them dry.  A lost art, as far as we’re concerned.  With a bit of luck, they may stop dripping before we leave on Saturday.  On the positive side, our socks have relaxed away all their cares and smell faintly of lavender.  I only hope they won’t bubble up if it starts to rain.

It did make me wonder though: we found it hard to get a little washing done and we stand a fighting chance of being able to make out some of the words.  It must be horribly difficult if you’re one of these poor souls who have just arrived in the country, and whose language is so utterly different.  There was one poor man trying to shave in a doorway this morning.  So hard.

Anyway, all the above shannanigans meant that it was late morning before we got started on today’s waltz around Vienna.  Good old Rick Steves has got an “Introduction to Vienna” podcast which you listen to whilst sitting on the tram around the Ringstrasse.  Useful  as always but with a slightly odd echo which was accounted for when we realised that the couple behind us were listening to the very same podcast. 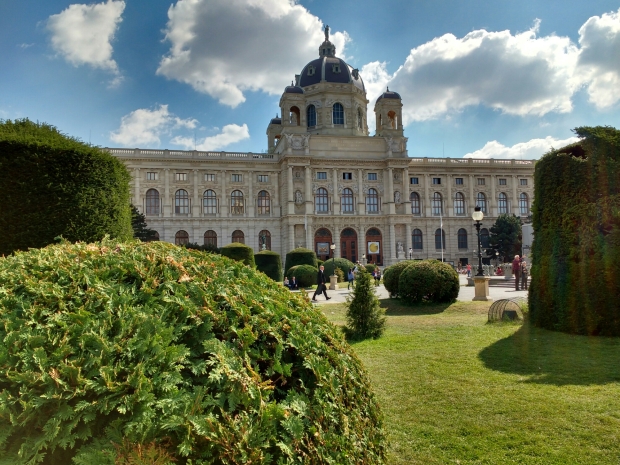 We stopped off at the Kunsthistorisches Museum.  This is a mixture of the British Museum and the National Gallery; though unlike them, it charges for entry.  It was purpose built by the Hapsburgs for their collection of artifacts and paintings and, as you can see, they kept the decor simple. 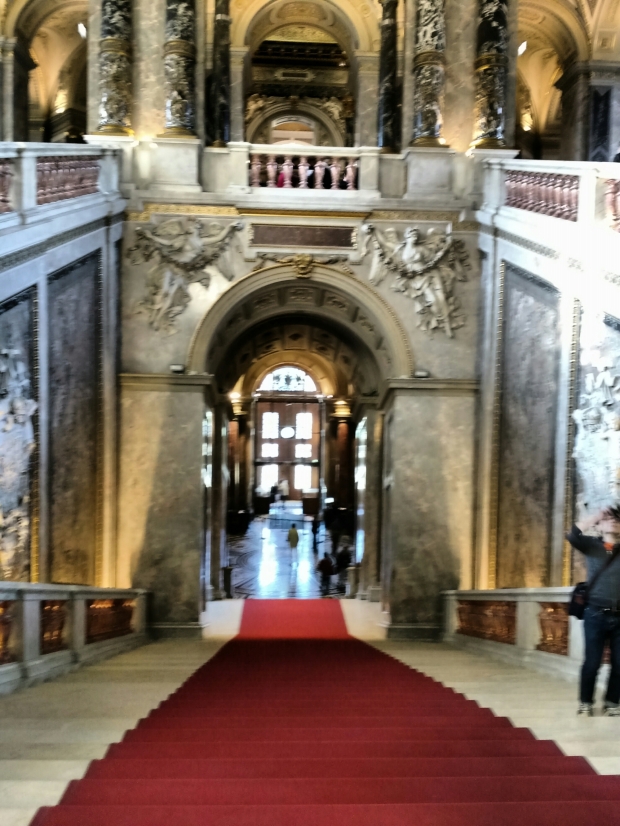 It’s a fabulous place to visit if you’re at all interested in art.  Something new to me was the collection of ‘handstones’: pieces of rock or ore about the size of a hand  which are intricately carved.  Like this: 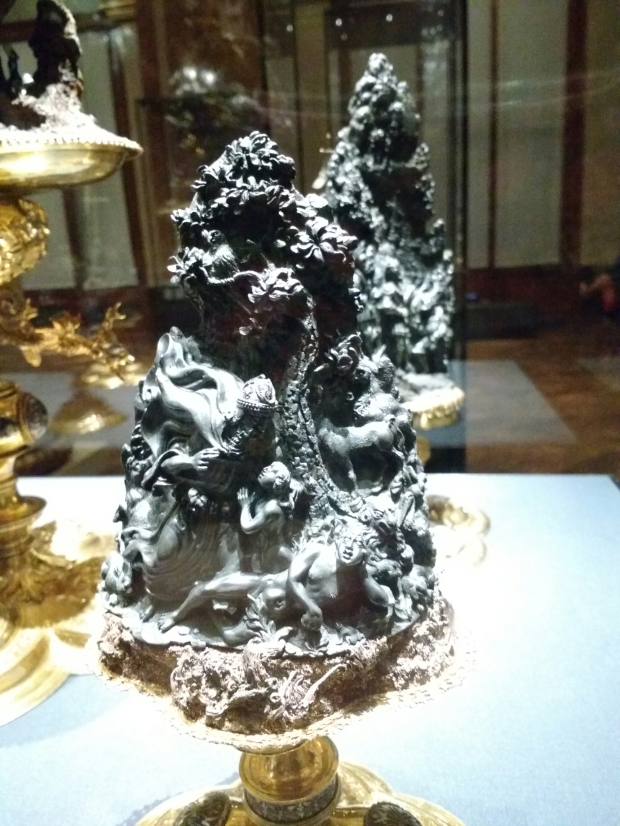 They were like complete worlds which you could hold in your hand, if they weren’t behind glass, of course.  Very similar to the Polly Pocket collection the InfantPhenomenon used to have.

Between looking at the artifacts  and the paintings, A.L.and I stopped for a quick cuppa, at which point it became obvious how the museum boosts its funds.  A fiver for a cup of Earl Grey, do you mind! This is the cafe. 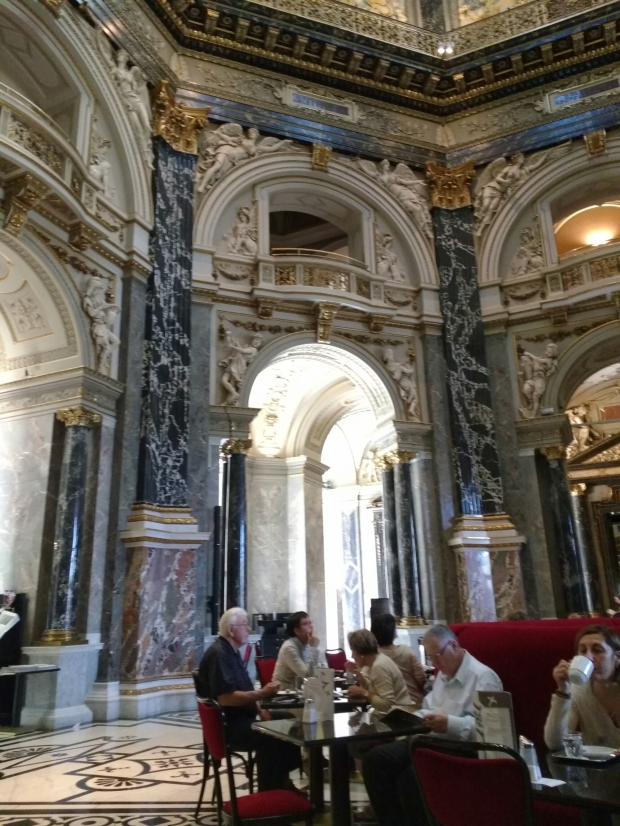 The art collection is superb, though. 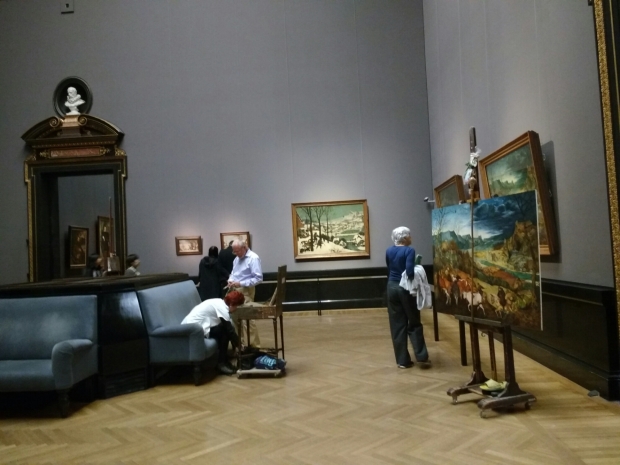 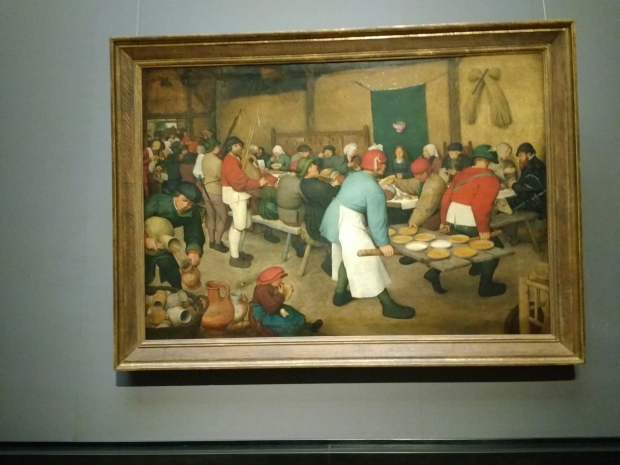 A bit of shopping and that’s us done for the day.  Caught the news about Mary Berry.  Maybe Sue can swing her a job with German Railways too.