We’d promised ourselves some exploring in the Yorkshire Dales and, to that end, had picked up from the tourist centre a promising looking leaflet for a circular walk. As directed, we’d gone through the churchyard, and over a stile, and left at a gate. The next instruction read “turn right at the tethered goats.”

Hours we walked and goats came there none, tethered or otherwise. After some miles, we were forced to retrace our weary steps.  When I relayed this to DearHeart, she shared words of such wisdom that I plan at some stage to immortalise them in cross-stitch.

It’s  wisdom of this nature which has won her the Chair of the “Frack Free Bridlington and Neighbouring Villages” group. Well, that and the fact that she brought the pen.

Having decided on the route for our Grand Tour, ActorLaddie and I set about booking accommodation. Both the InfantPhenomenon and Mrs Berry had positive experiences of AirBnB so we took a glance and were quickly converted. Ten lucky hosts won the honour to house us; ten lots of directions printed out and stuck in our ‘Going on an Adventure’ notebook.

Yesterday’s instructions to our accommodation in Innsbruck looked pretty foolproof. No trams or buses to catch; minutes from the Bahnhof, we were promised by our host, Kathrin.

“Leave the train station and walk straight in the Salurner Street. There is a Burger King at the corner. Walk about 400m till you arrive at the triumphal arch. My flat is just behind the arch.”

She would not be there, we were told, having gone to the Ocktoberfest, but she gave us the number of her keysafe.
At the station there were lifts to take us up to street level, so no need to fight off the one-armed, pregnant geriatrics wanting to help me with my case. We found Salurner Street easily; you couldn’t miss the Burger King; we strode on a bit and came across:

Confidently we looked behind the arch but no sign of Kathrin’s flat nor, indeed, of the street when she lives. We walked around a bit looking at street names but were none the wiser. Eventually I resorted to fiddling around with the data-roaming settings on my phone and searching for the street name on GoogleMaps. It took us back to Salurner Street, walking down to the end of the road until we found 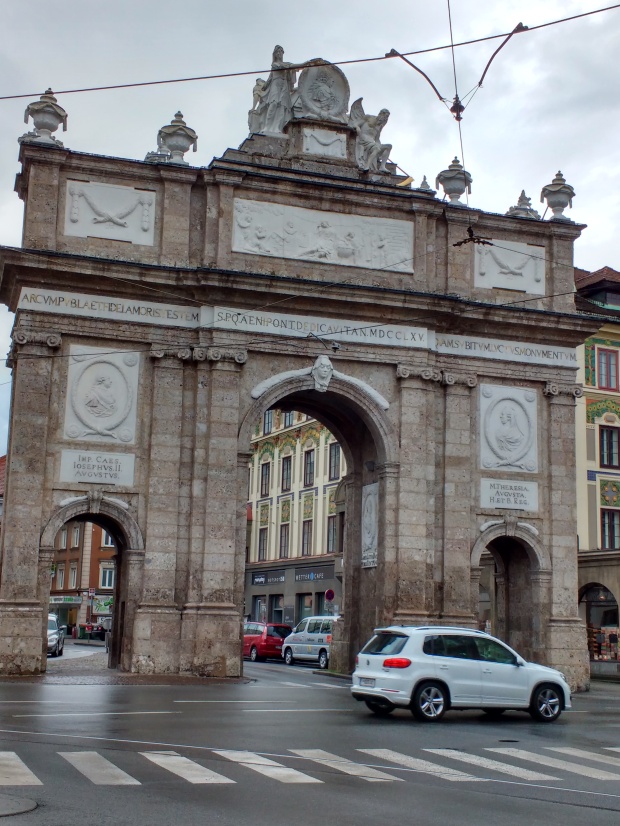 The other triumphal arch! We may have had more success with tethered goats, this being goatherd country. The arch – and Innsbruck generally – looked pretty good at night too, despite the drizzle. 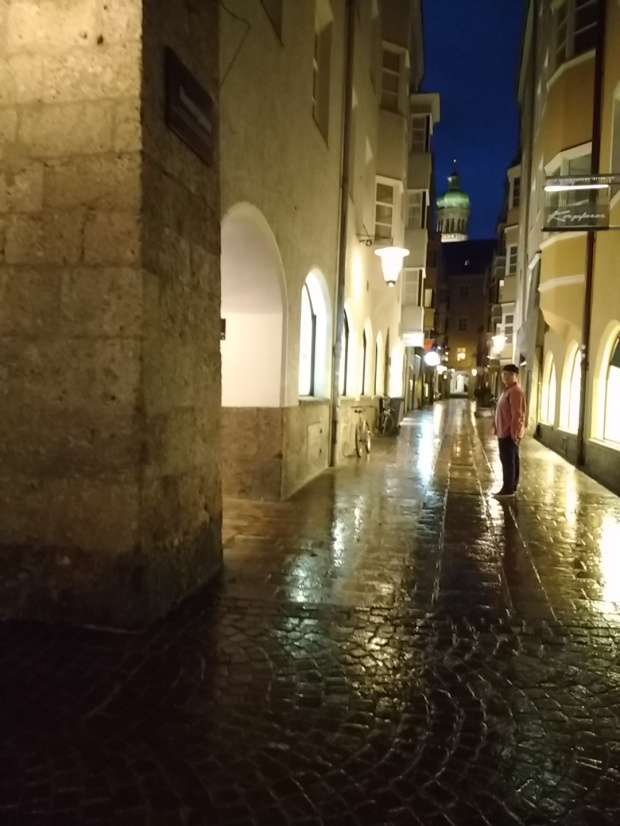 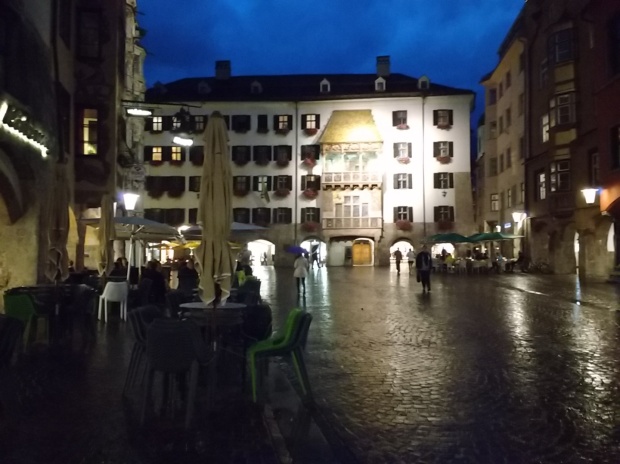 We have now donned lederhosen and wimple; ten minutes to Salzburg! The hills are alive…