Or, at least, I know a girl who does. 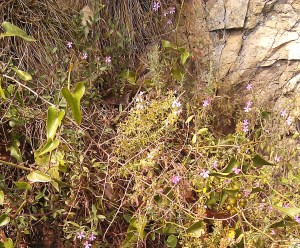 Rebecca also shows us Stone Pines – the source of pine-nuts, for the making of the besto pesto; a strawberry tree whose fruits are allegedly so disgusting that the Italian name translates as ‘eat once’; and a herb which smells intriguingly of curry.

We are being guided through an utterly magical woodland in the Cinque Terre area of Italy. Although the Five Towns which give the area its name are themselves heaving with tourists, we are well away from these, up in the hills. Here there is bird-song and our own footsteps and I would not be surprised to chance at any moment upon Titania and her retinue making beds from the wild thyme and brewing something spicy. 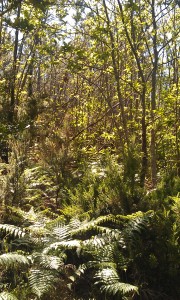 This is an extraordinary landscape, caught between the sea on one side and mountains on the other.  Until the railway arrived in 1919, Rebecca tells us, the whole area was only accessible by boat.  Frequent raids by pirates meant that people settled way up in the hills, in villages which cling to the near-vertical landscape, between row upon row of terraced small-holdings.

As someone who finds Muswell Hill a bit of a challenge, I simply cannot imagine living in such a place. ActorLaddie suggests that perhaps people evolve to have one leg shorter than the other, to cope with the hills, but then we realise that this would mean only ever walking in one direction. So, perhaps not.

Rebecca, our guide today, is a Yorkshire lass who came here on holiday and ended up marrying one of the family who run our hotel. She still has a Yorkshire accent but has taken on the lilting cadence of Italian. Imagine a mix of Peter Sallis and Montelbano, but up an octave. Completely charming, take my word for it.

It’s a golden afternoon. We follow Rebecca around pine cones as big as your fist, past trails left by wild boar, past a black and green snake curled up in a stone wall. Eventually the path leads into a village, then we follow it down and down and down to the station and wait in the late afternoon sunshine for the train to take us back along the coastline to the hotel.

This is such stuff as dreams are made on. 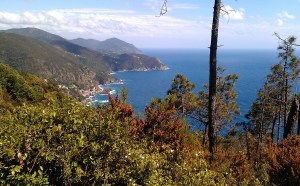