Flossie came in with the other children, about ten minutes before the end of Meeting. For a while she squirmed on a lap. Then, she wriggled free and crawled across the centre of the Meeting House to the feet of an elderly Quaker. His shoes had enticingly long laces, textured brown leather, solid stitching. It all needed close examination and she stretched out her hand to pull at the lace.

The look on her face was that of pure wonder. For the rest of the Meeting, she was absorbed in exploring the footwear of assorted, obliging Quakers. And we were equally absorbed in watching her.

Flossie came to mind on Sunday, as we sat waiting for the wedding to start. For Max, it was not shoes that caught his fancy, but gravel. The groom’s nephew sat himself on the path, just where it disappeared under the red carpet. Piece by piece, he examined the stones and decided they needed relocating. He set about the task with the absorption of a brain surgeon while we adults were struck by other objects of wonder.

The strings of paper cranes shimmering in the wrought iron pagoda where the actual ceremony would take place: a thousand of them waiting to pass their luck onto Bride and Groom.

The beauty of the grounds, now sunlit on a day which, up till then, had promised rain.

And, most wondrous of all, the young people. Groom waiting by his Best Woman, and YoungLochinvar, ushering away, and InfantPhenomenon, chatting and laughing with the others: all friends since they were children together in the Woodcraft Folk. Now beautiful and confident young men and women, getting married for goodness sake. How did that happen? Magical. 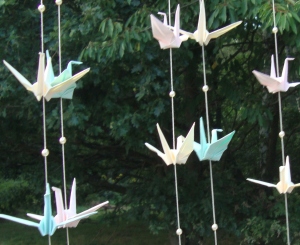 Now here’s a thing.  Yesterday, courtesy of the GiveAsYouLive scheme, Amazon paid 30p towards the cost of Parkinson’s research due to me buying books with a gift voucher I was given for my birthday.  And, as the person who gave me the gift voucher was also signed up to GiveAsYouLive, then Amazon paid another 30p for the same purchase.  I wouldn’t for one moment suggest that any major shop from Amazon was made by getting a gift card and then spending that.  This would be most unfair to Amazon.  I mean, you might think that, but I couldn’t possibly comment.  The link to GiveAsYouLive is here.