282. Should auld acquaintance be unfollowed….

“Do you think that if I stopped looking at Twitter and Facebook, I’d get my book finished quicker?”

“No. I think that unless you stop looking at Twitter and Facebook, you’ll never get your book started.”

More brutally honest than I was hoping for. Still.

It has to be admitted that for five years I blogged pretty much every week, whereas now… That’s despite having had much more work to do and far fewer free hours. Which reminds me, great Tweet from Richard Osman today: “My New Year’s Resolution is to annoy less grammar pedants.”

But now – actually, it could be that nowdays I do spend a wee bit too much time on social media…

I could cut out Facebook, no problem. I hardly ever look at it, actually. In fact, I’ll close my account now. Hang on a minute…

OK. That took longer that I thought. Partly because they make you go all round the houses to leave Facebook. But also – there are some really gorgeous photos from the Vestibules, who visited Kew yesterday. The winter lights look fantastic. We must go next year.

So, Twitter. Obviously, people can manage without Twitter. Billions did and billions do. It’s New Year and that’s the obvious time to sweep out the old. On which subject, did you happen to see Eddie Mair’s tweet today? – “I now have four books on how to declutter.”

This is definitely going to be much harder. At the moment, my day starts with Victoria Wood: 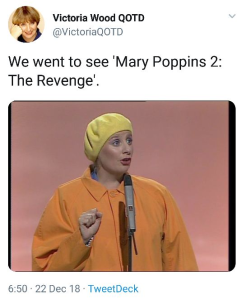 From there on I dip in and out, glossing my day with commentary from people I admire or who make me laugh. The Archers definitely won’t be the same without the wit of fellow addicts. 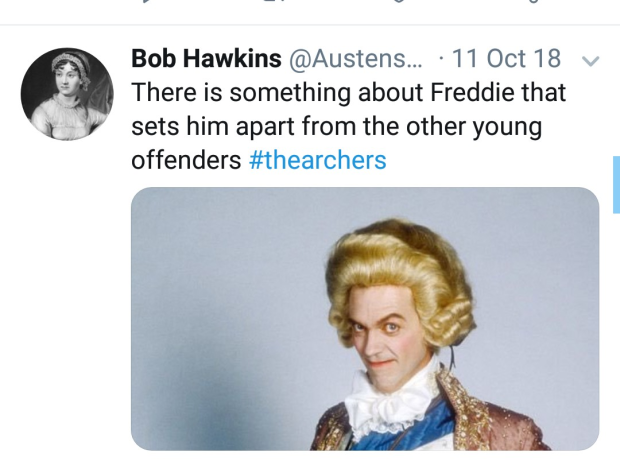 So, this morning, I’ve culled the number of people I follow from a couple of hundred down to a dozen: namely, a handful of Parkinson’s feeds so I don’t miss any important developments, a sprinkling of close friends and relations, Transport for London, our local community police, the Guardian and just the one comedian / writer.

I’m only going to check Twitter twice a day – mid-morning and mid-afternoon – and for just five minutes. And with the time I save, I will read and write worthwhile literature. Really, I will.

Decision made. Novel starts now. I’ll just have a quick look at my What’sApp groups.

In the meantime, wishing you and yours a peaceful and happy New Year. We can do 2019, team, Brexit and all. This too will pass.