Glory be, I’m tired! Today we did Salzburg: 16,959 steps on the pedometer if you are counting. So I fear you’ll need to make do with the highlights before I go completely onto standby. ActorLaddie is already knocking out the zeds as I type this.

Now, we’re suckers for an audio guide, ActorLaddie and I, and today we had ample goodness for our ears. There’s a chap called Rick Steves who records guides for many major tourist attractions. We’d used and liked his podcasts on Rome: he has a nice manner, is informative and, above all, lets you download his work for naught.  So, even though I see us more as travellers than tourists, nevertheless I popped some onto our phones before we left Blighty.

There are official guides a-plenty, of course and our host Beate had left a selection of leaflets in our digs.  For a mere €50 we could have toured the salt mines: apparently Salzburg gets its name from being the town where everyone came to get their salt, Rick told us. Tempting but no.  For €26 they offer a Mozart City tour, including a gander at his birthplace.  And for only €42 you can experience the Sound of Music tour, seeing the spots where they did some of the location work and look at the outside of the Abbey where the real Maria was a novice and where she married her Captain (wimples not included.)

We decided to stick with Rick.  One of the beauties of his guides is that if you get to somewhere you want to explore further, you can pause his podcast, explore away and then pick him up again. Which we did at assorted museums and churches.

So today I’ve learnt about Salzburg- including some Sound of Music stuff – with Rick.  We went into the city museum and listened to their audio guide on the history of the city.  We went into the house where young Mozart and his family lived and listened to  their audio guide.  I’ve been guided to the gills and I’m now going to share my learning with you for free.  Are you sitting comfortably? Then I’ll begin.

Statue of Mozart in this morning’s rain 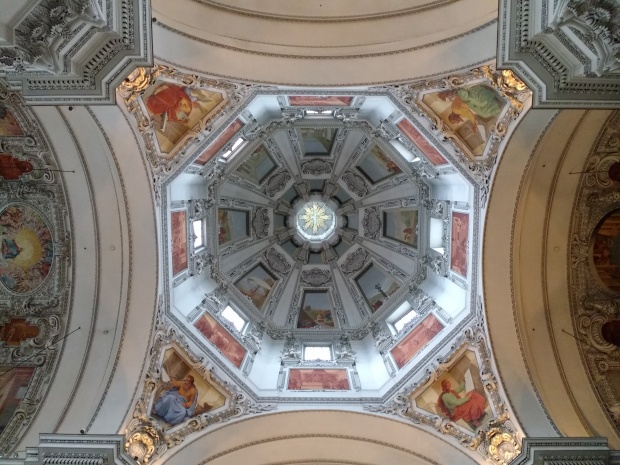 We saw the outside of the house where M was born.  As you’ll see, the lower half has been carefully preserved as a Spar supermarket.  It’s what he would have wanted. 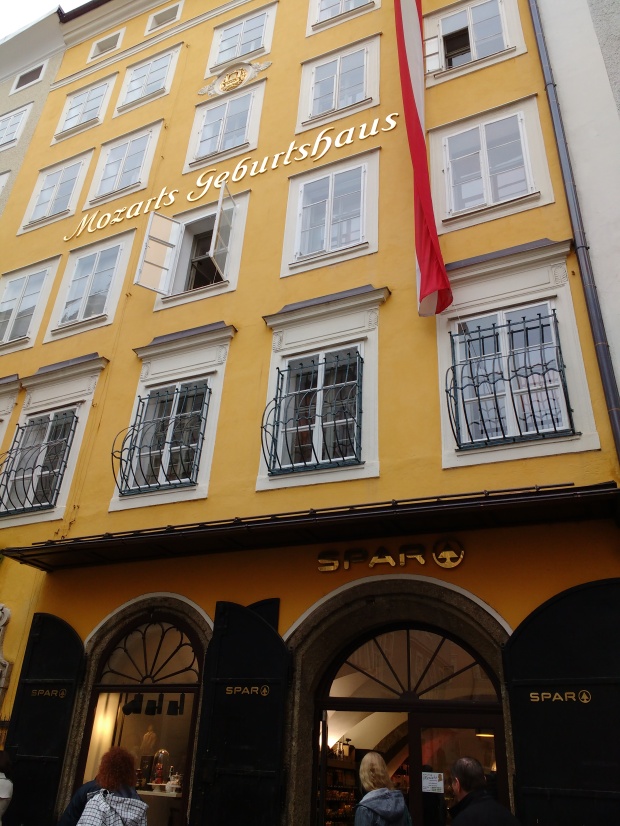 Tomorrow, we head off to Vienna.  But before I sign off, I must show you where we’ve been staying these couple of nights.  We have the whole apartment and there’s even a log burner.   Bliss.

So, in the words of Amadeus himself: so long, farewell, auf weidersehn, adieu … (K2016)